Problems with Police? You are to Blame! 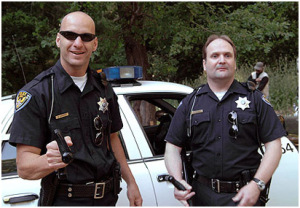 William Ryan published his book, Blaming the Victim, in 1971. That is over 40 ago.  His topic was how dominant culture justified racism and social injustice by blaming the victims–Black Americans. The book was basically a response to Harvard’s Patrick Daniel Moynihan’s Black Families, which laid the blame for much of the plight of Afro-Americans at the foot of black culture.

However, Ryan coined a phrase that resonates across the decades, in fact across centuries of American social life.  Anyone with a mindless commitment to the current power structure uses this strategy to rationalize any misconduct by officials, especially police. In Baltimore, you die for running while black.  In McKinney, a cop bullies and pulls his sidearm on “unruly teens.” FOX and a ton of Internet yahoos then take up the cry that basically translates into Ryan’s title–Blaming the victim.

It is as predictable as dawn, but unlike dawn, it is always an ugly event.  It is as if there is this closet full of slimy things and mindless trolls that represent the worst of our society, and it flies open whenever someone abuses their authority and the victims cry for justice. What the perpetual apologists for authority do is simply shameful.

“He shouldn’t have run!  She shouldn’t have resisted!  They should have just followed his orders, and none of this would have happened.  They were playing loud music and arguing with the security guard.  My five year old was crying because of all the yelling and tension.  One of them might have had a shank.” Yada! Yada! Yada!

Read the southern newspapers from the Reconstruction era and you will see the source of the FOX scripts. All those white dudes wearing the sheets were pushed into their violence by the actions of those uppity Freedmen and their Yankee supporters.

Our society has an extraordinarily long history of justifying official violence against vulnerable minorities by blaming the victims for their fate.  And, there has always been some significant segment of the media who sang the oppressor’s song — no matter how ugly the tune.

In the 19th century freed slaves were trying to vote Republican.  Today, “those” people are sick and tired of being disrespected, beaten, and killed by thugs in uniforms.  It took a century for the promise of voting rights to be made real.  Things move much faster in this day and age.  That means some good things.  Cries for justice ring out more quickly and clearly. It also means we must be prepared to endure the barrages of “blaming the victim” rhetoric that will appear just as quickly and clearly. Even in the face of video evidence, they prattle on and on.

Just tune into FOX and you will see it all played out. Bent Hume recently had a truly extraordinary bit with an ex-police chief who claimed the strategy now was for agitators to taunt police into violence, and unfortunately too many officers fell into that trap (on camera). It was unclear whether this was a conspiracy or just a natural outgrowth of a growing disrespect for legal authority driven by liberal media.  Either way, the implication is the same. The police in McKinney were obviously being victimized by these cunning teens provocateurs.

These people are, believe it or not, really serious and millions of people listen to this trash. We need to name this strategy for what it is. Whenever we hear it, we need to burst the thin bubble of respectability with which others try to cover this unsavory element in our culture.