Why I Would Probably be Shouting “DEATH TO AMERICA!” — If I Were Iranian.

Americans are not big history buffs. This is especially true when it comes to remembering our foreign policy screw-ups.  Ted Cruz and other R hopefuls are no exception, particularly when their studied ignorance gives them a chance to take a swipe at President Obama or Hillary Clinton.  Much of the braying in the debate this week was about Iran.

So, Iranian leaders love to fire up the home crowds with chants of “Death To America.”  We don’t like that. No reason we should. But, we don’t really think about the reasons why some Iranians may feel that the USA is the Great Satan. Let’s be honest, now. If any country had done to us what we have done to Iran we would be calling it The Great Satan or worse.

Let’s play a game of historical “what-if.” For the purposes of this illustration, I will use Iran as our powerful antagonist. What would Iran have to do to qualify as the USA’s Great Satan?  The simple answer is they would just have to do to us pretty much what we did to their country.

1. Those crafty and immoral Iranians would have to assist the Brits in engineering a military coup in the U.S. that deposed a legitimately elected government (maybe Truman’s) and replaced it with an autocrat.

2. Iranian and Brit oil companies would then take over all oil production in the U.S. The U.S. government installed by the Brits and Iranians would get 50% of the oil revenues, but it would not be allowed to review the foreign oil companies’ books or have members on the oil company boards.

3. The Iranian Revolutionary Guard would have to train the new American regime’s security forces.  Those American forces would then imprison, torture, and kill hundreds, if not thousands, of their own citizens.

5. Iran would refuse to return the deposed American leader to the U.S. for trial, or help account for what seems to be $50 billion dollars in American oil revenues that seem to have “gone missing.”

After a popular uprising that deposed the Iranian-installed autocrats and disbanded their Iranian-trained secret police, the new American regime, recently freed from the yoke of foreign cont 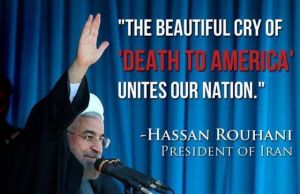 rol, would mobilize support from the populace with a chant of “Death to Iran.”  And, we would all be in the streets joining in that chant, which would probably be led by people like that herd of Rs running for POTUS.
Just to be clear, I am no fan of Iran, its domestic policy, its foreign policy, or its Islamist state.  But, Ted Cruz-like drones roaming the airwaves in this country need to take a deep breath.

Listen up, if you can stop flapping your Joe McCarthy-like mouths for a moment. Just remember it’s the Iranians who think the Iran nuclear deal is a pact with the Devil.  Why should we be dumb enough to buy their line?