The Proper Way to Think about “Good Guys with Guns” 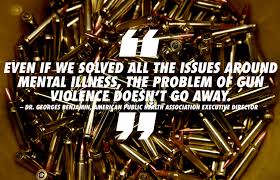 The recent horror in Texas, the expected responses were quick in coming.  From a county sheriff in Florida we get:

“The only thing that stops a bad guy with a gun, is a good guy with a gun,” Polk County Sheriff Grady Judd tweeted on Monday. “We do active shooter training.”
Even some citizens in Sutherland Springs echoed the same feelings, wondering what would have happened if church members had been armed.  This, of course, is pure NRA-speak.  But, in a more analytic vein, how might be best think about “good guys with guns.”

First, we need to recognize that in our society (over 300 million firearms in 116 million households) guns are not restricted to good guys.  So, let’s think about the effects, that we know of, about increasing the density of firearms in our society.

So, someone reads about the Sutherland tragedy and buys a gun. Let’s say that s/he is now prepared to stop a mass casualty event involving a firearm.  Let’s assume the mass casualty event s/he stops is equivalent to the Texas tragedy: 26 died, 20 injured.

While s/he waits for that mass casualty event to happen, armed Americans will go about their daily business. On each day that he waits, 87 people in the USA will die due to gun violence (33 of them will be murdered).  On each of those days, 183 Americans will be shot, but they will survive their firearm-inflicted injury (38 of these will be children or teens). (1)

As best I can tell, in 2016 the USA had seven mass casualty events that involved ten or more persons killed or injured. (2)  So basically, we had one such event every 52 days.  Let’s assume that data hold for 2017. During the 51 days that good guy waited for his or her time to act, 4,337 Americans will have died from a gunshot wound; 1,683 persons would have been murdered. Also, 9,333 persons would have been shot but survived.

These killing will not be random. They are, more likely, than not, to have been more women than men; often women involved in domestic disputes.  They are likely to have been suicides, especially among younger men.

This is not an analysis of the marginal impact of that one person buying a firearm. Instead, it is a more general statement about the nature and magnitude of firearm violence in America.

My insightful spouse, Dr. Catherine Hawes, argues that the only way to reduce this toll and get some sensible firearm safety measures passed (all we can hope for in America), we must adopt NRA tactics. We need some firearm safety organization to organize a large cadre of “single-issue voters,” who will tell elected officials that they can expect its membership to work vigorously against them if they continue their intransigence on firearm safety.  If this can generate a few wins in close races, then we can expect to capture some measure of the power of the NRA.

Maybe, all I know is that we need to do something to stop this ever-increasing gyre of death.  There seems to be no shocking event that will push the NRA off its filthy, blood-drenched pedestal.