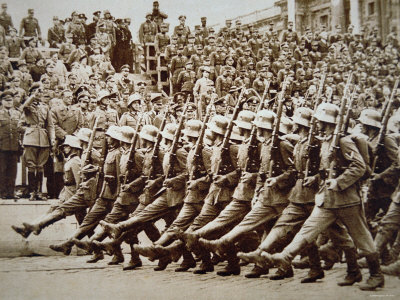 Over the last few months I have read Anthony Beevor’s Ardenne 1944, an acclaimed military historian’s book on The Battle of the Bulge. The famous Malmedy Massacre of over 80 US soldiers occurred during that last gasp Nazi offense. That led my to reading Hitler’s Warrior: The Life and Wars of SS Colonel Jochen Peiper. Peiper commanded the unit of the 1st SS Panzer Division (the Liebstandarte) thought to be responsible for the massacre.

By reading those two books, I discovered that over 70 men were sentenced to death for the Malmedy Massacre by an American military war crimes tribunal at Dachau. The US Senate later investigated the Dachau trial because of charges the confessions included in the trial record were coerced by torture. Even though he was not on the Committee involved in the investigation, Senator Joe McCarthy played an active role in attempting to discredit those confessions. In the end, the death sentences were commuted.

Only after reading those two well-regarded books did I basically stumble randomly on the story of the fate 11 artillery men from the US 333 Field Artillery Battalion (an African-American unit) at Wereth in Belgium. The 11 escaped as their unit was overrun. A Belgian farmer took them in, but they were captured. Their captors were members of the Waffen SS, probably also from the 1st SS Panzers. The 11 were marched out of town. When the snows receded later, their bodies were discovered. They all seem to have suffered multiple bayonet wounds, a fractured skull, and multiple gunshot wounds. This was neither mentioned in Beevor’s work nor the book on Peiper, which goes into incredible detail about Malmedy.

There was no war crimes trial for the murderers of these men of color. There was no serious investigation into the event. 50 years later, in 1994, a Belgian who had been a boy when his father tried to aid our soldiers put up a cross in the cow pasture where their bodies had been found. His touching act awoke at least a part of the world.

In 2004, a decade later, a monument was erected in Wereth. In 2011, the story of the massacre was the topic of an independent film entitled The Wereth 11, funded by a well-known amateur war historian who just happened to see that monument. In 2013, a writer for USA Today did a story on the massacre.

What all this has to do with Black History Month should be clear. Our national history is largely the product of white men writing about the exploits of dead white men. Our history is in reality full of quiet back roads populated by legions of unsung souls who were not white. Only by narrowing the focus of our historical inquiry, even if only for a month, will all Americans begin to understand the contribution to this nation made by people of color. Black History month is one way of moving students and citizens off the well-traveled roads of our history into those important, but less-traveled paths that enrich our picture of our nation, our sense of its history, and possibly our own personal worldview.

For more information see the sites below.

Background of movie and details