SOME PERSONAL HISTORY: A TRUE SON OF THE SOUTH SPEAKS ABOUT STATUES, “OUR HERITAGE,” AND UNC’S “SILENT SAM.” 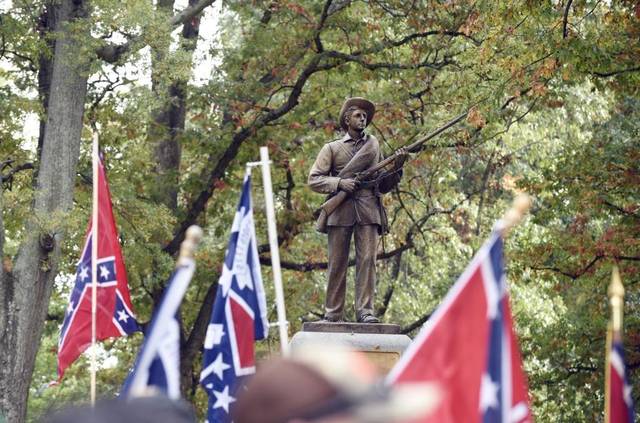 My apologies for being a bit of a nativistic here, but DJT argues that to remove statues of Confederate “heroes” is destroying our national heritage.  Seriously, he has real no idea what “our” heritage is. His family didn’t arrive here in the United States until three decades after what some have referred to as “the recent unpleasantness” ended.

I think his claim to know anything at all about our 19th century nation’s heritage may only be true if his father was indeed a KKK member in NYC during the first few decades of the 20th century.

I suspect he probably builds his image of our history thru watching Fox Noise, running through some crazy right-wing publications, and maybe listening to a few talk radio cretins. Then, he thinks the picture these trolls paint is a real picture of our “true heritage.”

Okay, time for some personal truth telling.  While DJT may not have a firm connection with that national convulsion that forever marred and marked “our heritage,” I certainly do. My great grandfather fought for the Confederacy in the 30th Georgia Infantry and somehow survived that conflagration that killed or wounded almost 30 percent of those serving in the armed forces of the Confederate States of America, killing just over 13% of all southern males between the ages of 10 to 44. For comparison, in WWII, US casualties (killed or wounded) were just over 9% of those serving.

In addition, Pal Phillips’s father, my great, great grandfather, is listed in the census as an overseer.  You know, the guy who did all the nasty work involving slaves, while his boss sucked down mint julips and in many cases sexually abused the house staff who were women of color.

I wish there were some way that page in my family’s history could disappear, or at least become more palatable.  But, there’s no relief. It’s a stain on my family’s history that can’t be erased. I could develop all sorts of rationalizations. My family was poor. They knew no better. They were victims of history, like all those in the Civil War. It was over a century ago, and mores change. But, none of these really absolve my ancestors. They were part of, and fought to preserve, a terribly vicious element of our nation’s history.

Butts County, Georgia, was their home county and the home of The Butts County Invincibles, the company in the 30th Georgia Infantry, with whom my great grandfather fought in the battles of Franklin, Murfreesboro, and then Nashville, Tennessee.

In the Battle of Nashville, almost his entire regiment was killed, wounded, or captured.  Pal Phillips was only eighteen and a conscript (draftee). I suspect he survived the Battle of Nashville by mounting what was known as “Shank’s mare” and running away as fast as his two legs (shanks) would carry him. Or, he might have been a messenger sent to General Hood to tell the general of the regiment’s dire situation, and he was unable to rejoin his unit before it was shredded by artillery fire and enveloped by Union troops.  He may have carried the unit’s precious standard to safety amid a hail of screaming, minie balls. Possibly, he was a coward or a hero, or more likely he was just someone who somehow managed to survive in a perilous situation.

Later, he retreated with General Joe Johnston into North Carolina. There, my great grandfather, Pal, contracted variola (smallpox) and was discharged just before the end of the conflict. This is no real surprise. Disease was rampant in both Union and Confederate camps.  Over 60% of the military deaths in the Civil War resulted from disease. Measles, smallpox, typhoid, cholera, diarrhea, pneumonia, malaria, and tuberculosis were the seven illnesses that did the most damage. He was lucky that his illness was not fatal, but it put him on his own in the few waning months of the war. He had to find some way to stay alive and return to his home in central Georgia.

For the movie buffs among us, this is a tale bizarrely reminiscent of the plot of the 2003 film Cold Mountain in which a wounded North Carolinian (Judd Law) tries to make his way home to his true love (Nicole Kidman) after deserting. The differences, however, are pronounced. Pal Phillips was a Georgian who did not desert. He was given a medical discharge in March; Johnston in North Carolina surrendered to Sherman in May; my ancestor had to get from North Carolina back to the heart of Georgia through all that blasted, war-torn landscape filled, one can surmise, with all sorts of dangers.

Butts County was in the heart of the land General William “Cump” Sherman destroyed on his march from Atlanta, Georgia to the sea. For Pal’s return, no working farm that had been held together by brave women who looked like Nicole Kidman or Rene Zellweger was awaiting him.

I suspect what really awaited him were only ashes where once there were crops, the skeletons of dead stock, burned out cabins and sheds, no seed corn, and a hungry family. After that man-made maelstrom of destruction, probably nothing remained of whatever lives my family had built or might have built if undisturbed.

Like so many other distressed Southrons, just a few years after the war ended, they headed west. Finally settling in Texas, there they endured their own form of North American peonage as dirt-poor share-croppers working someone else’s land near Dallas. I think the family may have owned the land at first, but then sold it (or had it sold out from under them for taxes or to pay a debt). However, it happened, they became croppers.

In the early 20th century, my great grandfather applied for a veteran’s pension from the state of Texas, which he received. His claim indicated his health had been ruined by the malaria he contracted during his time in the war.

So, a major part of my family played its own part in that heritage about which DJT has no real clue, except maybe what his buddies like Steve Bannon and his ilk have told him.

So, what does a true son of the south think about what should be done with all these monuments. I am after all eligible to join the Sons of Confederate Veterans association. (As far as DJT goes, I don’t know if there’s a Sons of Ku Klux Klan Members association in New York.)

The descendants of those whom Lee and others sought to keep in chains should not be confronted with monuments glorifying their ancestors’ oppressors. Also, it is far past time that as a nation we shouted down the “New Confederacy” and “The Lost Cause” narrative that the Civil War wasn’t really about slavery and unduly glorifies those who fought, like Lee and Jackson, for the Confederate States of America.

Those statues weren’t built to glorify history.  They were metal fingers stuck in the eyes of people who favored racial equality.  Most were built in the early 19th century, when DJT’s father and many other white men in this country were wearing white hoods, or in the 1950s, when the civil rights struggle was beginning to gather steam.

Take the monument called “Silent Sam” placed on the University of North Carolina campus (where I taught for a number of years) to honor UNC students who died in the Civil War. That sounds  nice, but all one must do to understand the philosophy or ideology underlying such monuments can be garnered from perusing the 1913 speech given at the unveiling of the statue.

The speaker told the audience that soon after his return from Appomattox and near where the statue stands, he horse-whipped a “negro wench” for insulting a Southern lady.  He boasts of whipping her until her skirts were in shreds , and he proudly claims the purest strain of the Anglo-Saxon race resides in the 13 states of The Confederacy. (see site below for full document).

He also laments the fact that younger persons of his day did not know the debt they owed returning veterans like him. It was men like him who wrenched power away from freed blacks after the war. They turned the clock back and restored white power in the South. So much for a past worth honoring.

A professor at the University of Chicago argues that these statues are not an homage to the past; instead, they are a promise for a white supremacist future that resembles the world of slavery in the antebellum South. It is now time to erase forever any semblance of that twisted promise.