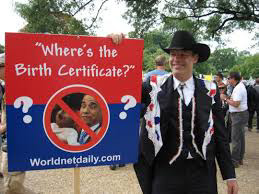 What is “American Exceptionalism?” At its core, it is the belief that we, as the first “new” nation, threw off the shackles of our European heritage and made ourselves and our nation anew. Americans have always been proud of the phrase because it Implied how special Americans felt their nation to be.

Unfortunately, It now seems that American Exceptionalism has devolved into is a claim to exceptional gullibility and an exceptional lack of the rudiments of logical thinking in matters of public concern.

I do not expect readers to accept my arguments without presenting evidence.  So, I will move along to a few examples of American’s ability to “suspend disbelief.”  I only wish that ability was restricted to operating when at the theater, the cinema, or watching entertainment on the television.

OBAMA IS NOT AMERICAN— About 19 percent of Americans (approx 60 million) believe President Obama is probably or definitively not a citizen.

IRAQ HAD WMDs— 42 percent of Americans (maybe 120 million) believe that we found active WMDs during the invasion.

EVOLUTION— One-third of Americans (approx 100 million) don’t believe in “the theory” of evolution.

ARMED REVOLUTION— Roughly 30 percent (96 million) believe that armed revolt may be necessary in the next few years to protect liberties.  Another 60 million weren’t sure.

To go for broke, here are some poll results on how many Americans accept popular conspiracy theories

We, as a nation, seem to believe that Exceptionalism means we have a unique right to ignore logic, evidence, and history.  Everybody else must be bound by common sense, the laws of nature, and the rudiments of logic–but we Americans are the exception.

As Robert Dahl put, “politics is but a sideshow in the great circus of life.”  It is true.  How to get the kids to soccer practice or make the next car payment are usually way more important. Citizens dip into and out of politics and social affairs at whatever time suits them and leave as quickly as they wish.  What they get in those sort moments is important. 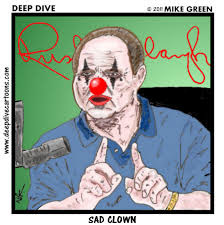 What worries me is that now the sideshow clowns and the slick hucksters seem to have abandoned the circus and moved into our 24 hour news channels, talk radio, state government, and the U.S. Congress.  They, their misinformation, and their shameless pandering to ordinary people’s fears and misconceptions now dominate far too much of public discourse in this country.  They do not elevate the public discourse.  Instead, they make a mockery of it, eroding the very foundation of democracy.