What you see below is a symptom of a country led to the brink by political entrepreneurs whose only concern is their own success.

Every society has its haters.  All societies have elements that are 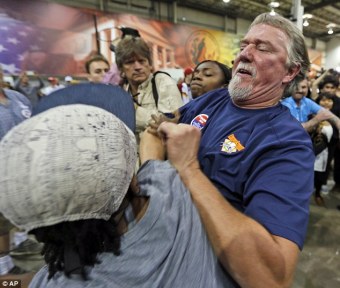 frustrated and will erupt into violence because of their fear and hate.  European skinheads with their swastika tattoos and attacks on vulnerable people are a case in point.

The United States has its own violent history with over 4,000 lynchings of people Of color.  You can add to this our post-WW1 history of violence against leftists and labor organizers.  Plus, you have our history of official police violence woven into this bloody fabric. Best not to have been a Black Panther or war protester in the late ’60s in this country.

What some current political activists in this era seem to have forgotten is how close to the surface that vein of violence runs in our society.  Men beat a homeless Hispanic man and claim their inspiration came from Donald Trump.  When all the candidate can say is that some of his supporters are “passionate,” then we have entered (or re-entered) a frightening phase in American politics. 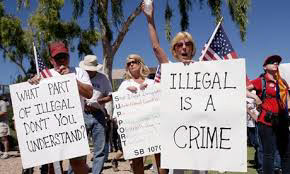 Just a few hours ago, a protester at a Trump rally was set on by the candidates supporters.  He was hit and kicked by Trump supporters for yelling “Black Lives Matter.”  Luckily security stepped in before he could be seriously injured. This happened as the candidate yelled “Get him out of here.”  Trump later said the man probably deserved to “get roughed up” because he was “disgusting.”

Donald Trump very simply calls out to Americans to unleash their worst selves.  He and his campaign feed off of that instinct. We need to stop thinking of him as some bad spirit that will eventually implode.  Hate that is fed and energized by the powerful or popular does not just dissipate when those elites lose interest or change tactics

Remember we are the country where lynchings, castrations, and the burning of victims were something like local fairs that drew spectators from far and near.  The post WWI hysteria about labor activists led to the public castration and lynching of a labor organizer in the far NW of this nation, as well as hundreds of deaths among workers and organizers.

As late as the 1980s, the Klan and Nazis could kill, with impunity, socialist labor organizers in Durham, North Carolina.  State and Federal court juries found all the shooters not guilt, despite video showing one man running up to a man in the ground and shooting him.  Such footage made a mockery of the defendants’ claims of self-defense.

We are a violent bunch of folk.  There are elements in our society that need only the barest shred of perceived social support to act out their anger and violent fantasies.  Donald Trump and his wannabes have probably never met the sort of  desperate and violent men that they are enflaming. They have never stuck their hands into the wide and deep river of cold-hearted violence on which such people ride through life.

Remember there were those in our society that bombed churches and blasted children to pieces. Do these elite agitators think all such foul creatures died out at the turn of the century?  The bad news is that these ogres of this ilk are still alive and well and some are simply waiting for someone to legitimize their rage.

During this election cycle, our haters have found their champion(s).  When people like Trump, with his popularity and support, join the ranks of the Joe Mccarthys, George Wallaces, and Father Coughlins, then we have regressed badly as a nation and entered a dark chamber with little visible light.  When brutal violence is blithely passed off as “passion” we need to recognize we are living in dangerous times, people, dangerous times.  Beware.